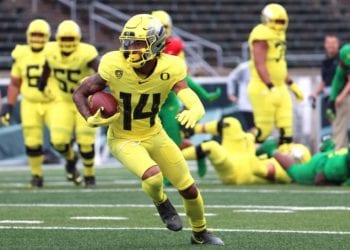 The next college football season will feature a number of clear-cut division races, but the Pac-12 North contains a considerable... The next college football season has a number of division races in which the division favorite is overwhelmingly clear. The... The Big Ten Conference will have a full college football season, a welcome change from a 2020 campaign in which... The next college football season features a Big 12 Conference race in which there are a few teams at the... The next college football season will involve a number of big dramas, but the Big 12 Conference has not typically... The next college football season will have a lot of tough questions and uncertain division races, but the ACC Atlantic... The next college football season contains a number of divisions which are wide open, but the ACC Coastal doesn’t really... The Youngstown State Penguins will travel to the FargoDome on Sunday gor a matchup with the North Dakota State Bison.... The college football season has been ransacked -- as has the world -- by COVID-19. Games postponed, canceled, players opting-out,... With the college football championship just around the corner, we take a look at one of the teams that will...

With 350 schools belonging to Division I basketball, there is never a shortage of news. College basketball odds are updated regularly because there is always a team or player making headlines. The beauty of NCAA basketball is that it provides a glimpse into the future and identifying NBA draft prospects is half the fun.

Top players from Gonzaga and Baylor, who met in the title game in April, have left for the NBA Draft, but they are two of the best recruiting teams in the competition. They will need to be as the race for the next NCAA championship is red-hot.

March Madness awaits the top 68 teams but the news ramps up well before Selection Sunday. There is always controversy surrounding which teams make the tournament and we have our finger on the pulse. Not only do we look at what’s happening around the conferences, but we see how it affects betting markets at the online sportsbook. Every news story has some impact on betting, so it pays to have a finger on the pulse.

There are no obvious standout teams this season. Gonzaga, Kansas and Michigan almost always create interest and their odds are likely to firm, but it’s a wide-open contest. That’s why so many bettors flock to college basketball, because you never know what to expect. March Madness odds change in a hurry because of the compact tournament schedule, so it can become a whirlwind of information.

It’s the one competition where teams like Loyola-Chicago or North Texas can eliminate the top seeds. It rarely happens in other sports, so it can pay to disregard the rankings and go on the eye test. We offer college basketball picks for teams that are sneaky contenders for the title, but because they fly under the radar, their odds are usually generous.