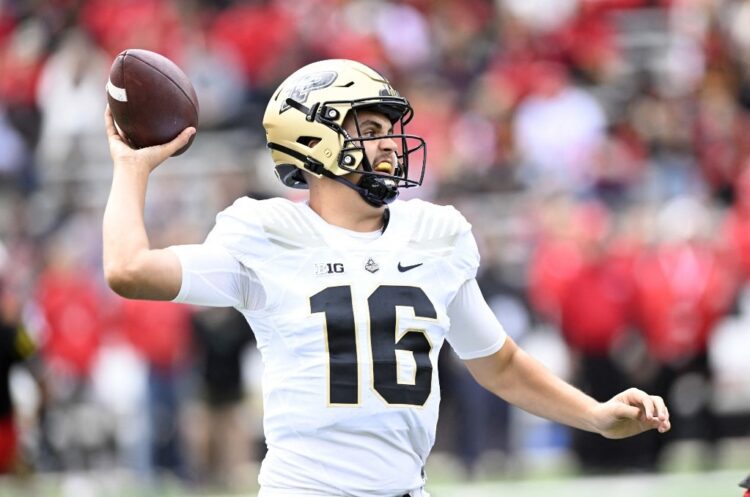 The Purdue Boilermakers travel to take on in-state rival Indiana Hoosiers. Purdue (7-4, 5-3 Big Ten) needs a win to stay in contention for a Big Ten Championship Game berth. Indiana (4-7, 2-6) will not be bowl eligible, but ruining its rivals’ lofty goals would end the season on a great note.

Let’s dig into the matchup, as neither team has been a safe bet at 4-7 against the spread (ATS).

Heading into the final regular-season week, Purdue has everything to play for. The Boilermakers are currently tied at the top of the Big Ten West with Iowa. Purdue may be a longshot to win the conference at +5000, but it hopes to make the title game. To clinch a spot in championship week, the Boilermakers must win, paired with an Iowa loss to Nebraska.

Against Indiana, the Boilermakers’ offense must find its footing. From Week 6 to Week 8, Purdue averaged 32.7 points and went over in three consecutive games. In the last three, the Boilermakers are down to 17 points per game and went under in two of three.

Quarterback Aidan O’Connell has not reached 240 passing yards during the three-week stretch, which is not ideal for a team that makes 43.3 passing attempts per game (sixth). To make matters worse, lead running back Devin Mockobee is questionable with a concussion. The Boilermakers’ second RB in line, Dylan Downing, is over 400 rushing yards below Mockobee’s season total.

Will Purdue solve its offensive slump against the Hoosiers, who rank 123rd in yards allowed per game?

After losing seven straight and failing to cover the last three games, Indiana got a much-needed win last week against Michigan State (39-31). The offense had a huge turnaround game with over 257 rushing yards after averaging only 15 points in the previous three games.

The Hoosiers’ decision to name Dexter Williams II as starting quarterback has completely changed the offense. With Connor Bazelak starting, Indiana was pass-heavy and had one of the nation’s worst run games. In Williams’ first start, Indiana only threw seven passes and ran the ball 44 times. The offense will need more balance against Purdue, which ranks 31st in allowed rushing yards per game. For comparison, the Hoosiers’ previous opponent, Michigan State, ranks 96th in run defense.

On defense, Indiana still has concerns after allowing over 500 yards in its previous game. The unit made one game-changing play with a pick-six, but the Hoosiers must play better against Purdue’s strong pass attack. With the defensive struggles, the total has gone over in four of the last five. For Saturday, linebacker Cam Jones, who has 54 tackles, will be out with a foot injury.

In this storied rivalry, Purdue leads the all-time series 75-42-6 and has won three of the last four. Also, the Boilermakers are 5-0 ATS in their last five matchups with Indiana. However, Purdue is 1-3 in its last three trips to Bloomington.

Saturday will be a perfect day for football, with a high of 58°F and an 11% chance of rain with low winds.

Stay away from the moneyline. Purdue offers little profit at -380. Indiana is intriguing at +300, and the Boilermakers have had some huge letdowns as favorites, including Week 10’s 24-3 loss against Iowa. However, Indiana has lost three of its last four against Purdue.

I like Indiana to cover. The Hoosiers covered as a 12-point dog last week, and Purdue is 1-4 ATS over the last five. Also, the Boilermakers allowed over 160 rushing yards in the previous game, while the Hoosiers have transitioned to a run-first offense.

This is another promising bet. As mentioned, Indiana should have success on the ground. In addition, Purdue is 20th in passing offense, while the Hoosiers are 119th in passing defense. Boilermakers’ QB O’Connell has hit a cold streak, but this should be the week he finds his footing.

There is not a prop for Purdue vs. Indiana that stands out. Stick with the ATS and total.