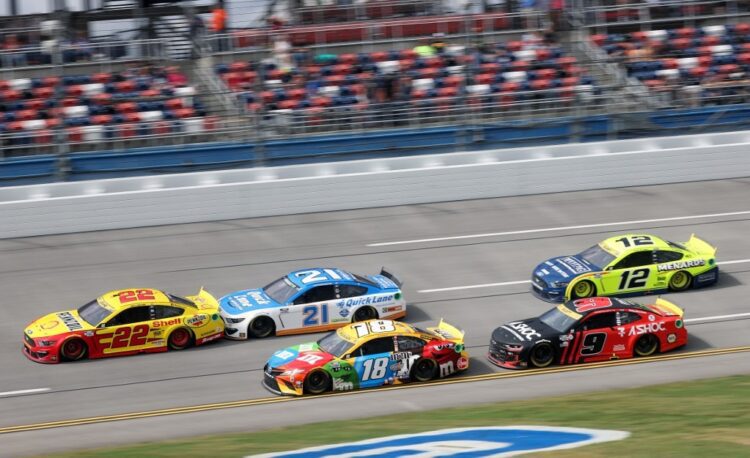 If the 2022 NASCAR Cup Series Championship can match last weekend’s elimination race in Martinsville, it’s safe to say all fans will be happy. In one of the most thrilling races of the season, Christopher Bell came from behind to pick up the checkered flag – which he needed to avoid being knocked out of the playoffs.

The real jaw-dropper was Ross Chastain going full daredevil mode and passing five cars full throttle on the wall in the final two turns to pick up the points needed to get him into the fourth and final spot.

It’s a tough job for the sportsbooks to draw up the NASCAR odds for this weekend because any one of the four between Bell, Chastain, Joey Logano and Chase Elliott could win this thing. Here are the profiles of the Championship drivers and why they are viable options to be the 2022 NASCAR Cup Series winner.

Logano was the first one to punch his ticket to Phoenix with his win at Las Vegas to get the round of eight underway. That was Logano’s third win of the season to go along with victories in Darlington and at the World Wide Technology Raceway East of St. Louis.

Now Logano turns his sights to Phoenix, where he led four laps in the spring race but couldn’t finish higher than eighth. Logano has finished in the top 10 in six of his last seven trips to the Phoenix Raceway, so he’ll likely be in contention on Sunday.

The 32-year-old has one Cup Series championship on his resume back in 2018, so he’s ready to end that drought.

There’s arguably no better driver when the pressure is on this postseason than Bell. He was facing elimination not just last week at Martinsville, but also at the road course in Charlotte at the end of the round of 12, where he also grabbed the checkered flag. Basically, don’t bet against Bell at the sportsbook when his season is on the line.

What is really going against Bell in this spot is his record at Phoenix, where his best finish is ninth place in five starts. Aside from his two wins, he’s also had a tough playoff, finishing no higher than 11th in four of the last six.

Chastain’s “video game move” on Sunday has some drivers impressed and others calling it “embarrassing,” but that’s the type of reality show drama we seem to have in the sports week in and week out. Regardless, Chastain is in the playoffs on points while knocking Denny Hamlin out in the process.

Chastain has a decent chance at Phoenix. We’ve already seen he’s fully prepared to pull out all the stops, riding the wall for the final turns at Martinsville, and he took home a runner-up at the spring race on this track. That being said, the second-place finish was the only time Chastain placed in the top 14 in eight starts in the desert.

Elliott is ready to get back into the Cup Series winner’s circle following his Championship win in 2020. He had to settle for fourth as Kyle Larson took home the crown last year. Elliott has won at Talladega this postseason and also led 54 laps en route to a 10th-place finish last Sunday at Martinsville.

Elliott led 50 laps at the spring race in Phoenix but could only muster an 11th-place finish. He does have a Cup Series-leading five victories this season. Elliott would be the go-to when betting online, but at the same time, anything can happen in the Championship Race. South America’s 9z is Making History, and the Brazilian Crowd Loves it