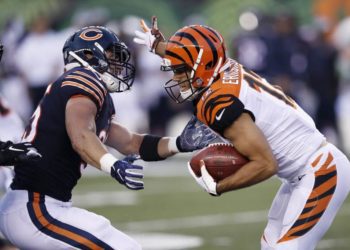 In a war of underachievers, the 4-8 Texans are one-point favorites in Chicago vs the 5-7 Bears. Houston has shown signs of life, winning two of its previous three games, including a 27-20 victory over New England in Week 11. The Texans lost a tough one last week vs the Colts, but QB Deshaun Watson has been playing fantastic football. Even without WR Will Fuller V, Watson should be able to exploit a mentally fatigued Bears’ defensive unit. Chicago watched a victory slip out of its grasp vs Detroit in Week 13, as the Lions scored 14 points in 43 seconds to erase a 10-point fourth-quarter deficit. The Bears have lost six straight games, and are 0-4 ATS in their previous four. Texans 27, Bears 17

Deshaun Watson said he’s tired of losing. Well, the Houston Texans are going to have a great opportunity to return to the winning column against the Chicago Bears.

Watson didn’t really miss Will Fuller (suspended) thanks to Keke Coutee (141 receiving yards against the Colts in Week 13), and RB David Johnson is back. With some rhythm he can be one of the best backs in the league.

The Texans average 24 points per game and the total has gone under in four of their last six games.

The Chicago Bears are not that different with Mitch Trubisky under center. Yes, they come from a 30-point performance, but that was against a poor Detroit Lions defense.

RB David Montgomery has been sensational the last couple of weeks and the Bears should focus on him carrying the load.

The Bears average 20.5 points per game (fifth worst in the league) and the total has gone under in six of their last eight games when playing as the underdog.

Go under in a close one.

BET ON THE HOUSTON TEXANS VS CHICAGO BEARS WEEK 14 GAME