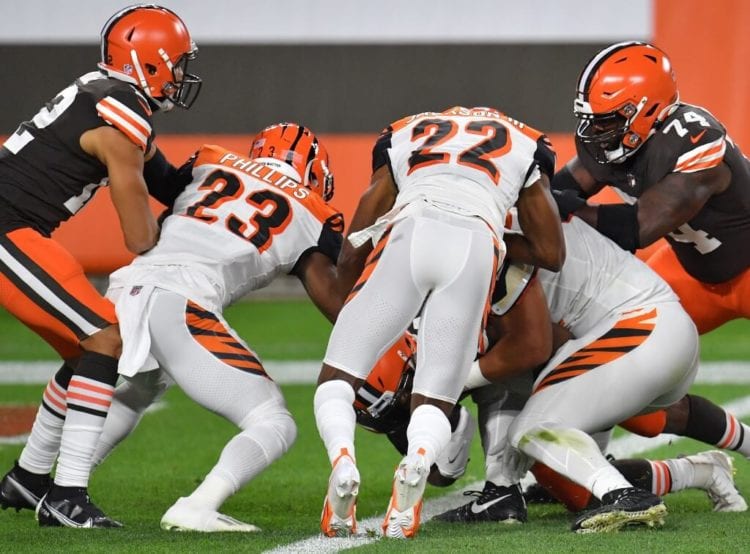 Take a look at the AFC Matchups Week 7 betting previews.

The Cleveland Browns (4-2) clash with the Cincinnati Bengals (1-4-1) at Paul Brown Stadium. The most recent NFL betting odds on our sportsbook show the Browns as 3½ -point road favorites. These Ohio teams are both coming off of tough Week 6 losses, but the Browns were manhandled by the Steelers. It’s difficult to comprehend how the bookmakers can favor Cleveland following that performance.

A contest which many experts hailed as the game of the week, wound up being the biggest blowout in Week 7. After scoring 32+ points four games in a row, Cleveland was rocked 38-7 in Pittsburgh, looking a lot like the Week 1 Browns. Cleveland’s 2020 offense is schizophrenic, Jekyll and Hyde. It seems the Browns can’t compete with the cream of the AFC North, never mind the rest of the NFL.

Third-year QB Baker Mayfield was benched in the third quarter, in favor of Case Keenum. Coaches claim that Mayfield was benched in order to protect him, which Cleveland’s O-line failed to do vs Pittsburgh. Mayfield entered the game nursing injured ribs, and he received no respite on Heinz Field. The Steelers D sacked Mayfield four times, and applied consistent pressure while bashing Baker at any opportunity.

Baker Mayfield is going to feel this hit from Cam Heyward for weeks. Knew Mayfield was pretty much done at this point. #Steelers pic.twitter.com/nrH8hphwo1

Prior to exiting stage left, Mayfield completed 10-of-18 passes for 119 yards and one touchdown. Baker tossed two interceptions and posted a pathetic 54.9 QB rating. WR Odell Beckham Jr. caught two passes for 25 yards, on four miserable targets. The Browns’ powerhouse rushing attack only managed 75 yards, and the D was flat.

Meanwhile, the Bengals had a 27-21 lead on a formidable Colts team heading into the fourth quarter last Sunday. Cincinnati was unable to hold off a late-game comeback bid by Philip Rivers in Indianapolis, and the Bengals fell 31-27. The Bengals have been in every game they’ve played this season, except for Week 5 vs the Ravens.

These AFC North rivals already played once this season, with the Browns winning 35-30 in Cleveland. Taking the Bengals with points in Cincinnati is an enticing prospect.

There are three undefeated teams remaining and two of them are facing off in Week 7. The Pittsburgh Steelers (5-0) and Tennessee Titans (5-0) finally get the chance to settle their differences in Nashville. The Steelers and Titans each have excellent odds to win the conference, with money lines of +450 and +725, respectively.

The Steelers pummeled the Browns 38-7 in their last game, committing zero turnovers while dominating time of possession. Pittsburgh’s defense was relentless, stifling Cleveland’s running game and chasing QB Baker Mayfield from the game in the third quarter. S Minkah Fitzpatrick’s 33-yard pick-six of Mayfield set the tone for destruction.

A Battle of Running Games

RB James Conner eclipsed 100 yards for the third time, scoring a touchdown for the fourth straight week. Rookie WR Chase Claypool caught all four passes thrown his way by an efficient Big Ben Roethlisberger, recording a game-high 74 yards. Claypool is trending upwards, and his Offensive Rookie of the Year odds reflect it.

The Steelers are looking every bit a title contender in this Covid-crusted season. The last time Pittsburgh started 5-0 was in 1978 when a certain Steelers dynasty won its third of four Super Bowl championships over a six-year stretch. Current Super Bowl Odds list Pittsburgh as the fourth-most likely to win, with a moneyline of +800.

Tennessee’s magic touch continues to produce victories, as the Titans edged the Texans 42-36 in OT last week. The Titans piled on 601 yards of total offense, rumbling for 263 rushing yards in the process. RB Derrick Henry danced, bashed, and sprinted his way to 212 yards on 22 carries, scoring two TDs. Henry’s 94-yard rushing touchdown gave the Titans a fourth-quarter lead, and he punched in the game-winning TD in overtime.

THE KING PUTTING THE TEAM ON HIS BACK! @KingHenry_2

Tennessee QB Ryan Tannehill played superbly, completing 30-of-41 passes for 364 yards and four touchdowns. Tight end Anthony Firkser came out of nowhere, catching 8-of-9 targets for 113 yards and a score. You can check out ESPN’s full game summary right here. The Titan’s passing defense was porous and needs to do much better on Sunday vs Ben Roethlisberger and the Steelers. This should be one heck of a game!

All of a sudden, the Buffalo Bills (4-2) are caught in a two-game slide. Do you know what the perfect medicine for a losing streak is? That’s right. A matchup with the Jets. The winless Jets are 0-6, with no reasonable end to their misery in sight.

NY got smashed in Miami in Week 6, losing 24-0 in an overall abysmal performance. Jets’ QB Joe Flacco went 21-for-44, throwing for 186 yards, no touchdowns, and one interception. NY’s rushing attack was pretty solid, but once the Jets found themselves down by a couple of scores, it didn’t matter as much.

RB Frank Gore and the Jets should have better luck in Week 7, going against a Bills team that just surrendered 245 rushing yards to the Chiefs. Buffalo’s defense got lit up by KC for 466 yards of total offense last week, and couldn’t keep up. Bills’ QB Josh Allen played a mediocre game, completing 14-of-27 passes for two touchdowns, throwing one pick. Buffalo’s rushing attack was lackluster, and they made several costly mental mistakes.

WR Stefon Diggs inexplicably walked back to the line during a fourth-quarter drive, incurring a costly penalty for Buffalo. Diggs did not hustle, and it must be disheartening to witness for Bills’ fans, players, and coaches alike. Buffalo was down nine points with about a minute and a half left to play, but that’s just unacceptable behavior.

One has to imagine that the Buffalo Bills will be watching a lot of tape during practice week. The Chiefs beat the Bills 26-17, and if Buffalo isn’t able to “right the ship” vs NY, kiss them goodnight. Expect a pissed-off Bills team to flex their muscles this Sunday.

The Kansas City Chiefs (5-1) appear to be back in business, after losing to the Raiders in Week 5. The Chiefs were extremely efficient on offense and startlingly stifling on defense, in their Week 6 victory over the Bills. Kansas City obliterated Buffalo in time of possession, 37:45 to 22:15, on its way to a 26-17 road victory.

The Denver Broncos (2-3) have won two straight games, defeating the dregs of the AFC East in back-to-back weeks. Most recently, the Broncos shocked the Patriots 18-12 in Foxboro. QB Drew Lock returned to action, struggling against New England’s defensive schemes.

Lock threw for 189 yards on 10-of-24 passing, no touchdowns and two interceptions. However, RB Phillip Lindsay set the tone with his groundwork, rushing for 101 yards on 23 carries. WR Tim Patrick was Lock’s #1 target, reeling in four catches for 101 yards.

The real heroes of this Broncos’ victory were the Denver defense and kicker Brandon McManus. The Denver D forced three New England turnovers and limited Cam Newton’s throwing lanes. McManus drilled all six of his field-goal attempts, including a 54-yarder. It’s not inconceivable that the Broncos give the Chiefs a decent fight here.

The Jacksonville Jaguars (1-5) haven’t won a game since their Week 1 upset of the Indianapolis Colts. The Los Angeles Chargers (1-4) have only won one contest this year, but have been extremely exciting to watch. The Chargers have shown moments of true electricity behind rookie QB Justin Herbert, and are favored coming off their bye.

The Jaguars were dominated by the Lions last week, and limped away from the 34-16 loss with more defensive injuries. LB Myles Jack, S Jarrod Wilson, and DLs Josh Allen and Abry Jones are all questionable to play Week 7. Meanwhile, L.A. is well-rested following their bye week. They’ve also activated DLs Melvin Ingram and Justin Jones off the IR.

The Chargers have demonstrated real moxie this season, taking the Chiefs and Saints to overtime, losing each game by three. Los Angeles also fought tooth and nail with Tampa Bay, narrowly losing a shootout in Florida. The Bolts are clearly the superior team here, and it will take a Herculean effort by Jacksonville to keep it close.