The defending champion Tampa Bay Buccaneers face their first real test of the 2022 NFL playoffs as the Los Angeles Rams come into town following an impressive beatdown of the Arizona Cardinals on Monday night. Tampa Bay crushed the Philadelphia Eagles in their Wild Card game but it’ll be much more difficult against the Rams, who have the kind of dominant defensive line that Tom Brady can struggle against.

Let’s check the latest news, stats, injury reports, and NFL betting lines for Rams vs Buccaneers. We’ve got plenty of NFL predictions for you to consider.

The Rams dominated the Cardinals, holding Kyler Murray to 137 passing yards and picking him off twice on defense while Matthew Stafford and the rushing game combined for 375 yards of total offense. Los Angeles was firing on all cylinders in all aspects of the game as Stafford finally earned his first career playoff win.

LA does have some injury issues as veteran offensive tackle Andrew Whitworth (ankle/knee), safety Taylor Rapp (concussion), and linebacker Troy Reeder (ankle) are some key contributors who are questionable for Sunday’s game. Whitworth is the most important of the bunch as he anchors a really solid Rams offensive line that gave Stafford tons of time to throw on Monday.

Anyway, the Rams have played great football for basically two months straight and have won six of their last seven games. These injuries don’t help but they shouldn’t make a huge difference for a LA team that has looked incredible as of late.

Tampa Bay had its own easy Wild Card win as the Buccaneers smoked the Eagles 31-15. Brady had a field day with the Philadelphia defense, throwing for 271 yards and two touchdowns while Ke’Shawn Vaughn and Giovani Bernard each ran for a score. The Buccaneers’ defense picked off Jalen Hurts twice and held the Eagles scoreless through the game’s first three quarters.

It was particularly impressive for the Buccaneers to play so well with multiple injuries that occurred before and during the game. Wide receiver Cyril Grayson didn’t play and is questionable with a hamstring injury while running backs Leonard Fournette (hamstring) and Ronald Jones (ankle) were sidelined as well.

Offensive linemen Ryan Jensen and Tristan Wirfs are both questionable for Sunday, as are cornerback Sean Murphy-Bunting and linebacker Lavonte David.

The Buccaneers can still win without a bunch of starters — they’ve shown that throughout the season — but them being shorthanded on both sides of the ball is bad news for Buccaneers’ bettors and great news for Rams bettors.

The Rams have actually beaten the Buccaneers both times these teams played since Brady went to Tampa Bay for the 2020 season. Los Angeles won their Week 3 matchup by a score of 34-24 earlier this season with Stafford throwing for 343 yards and four touchdowns.

Brady managed to toss 432 yards through the air but only had one touchdown and was sacked three times. LA’s defense stepped up in big moments and the Rams controlled things all day. 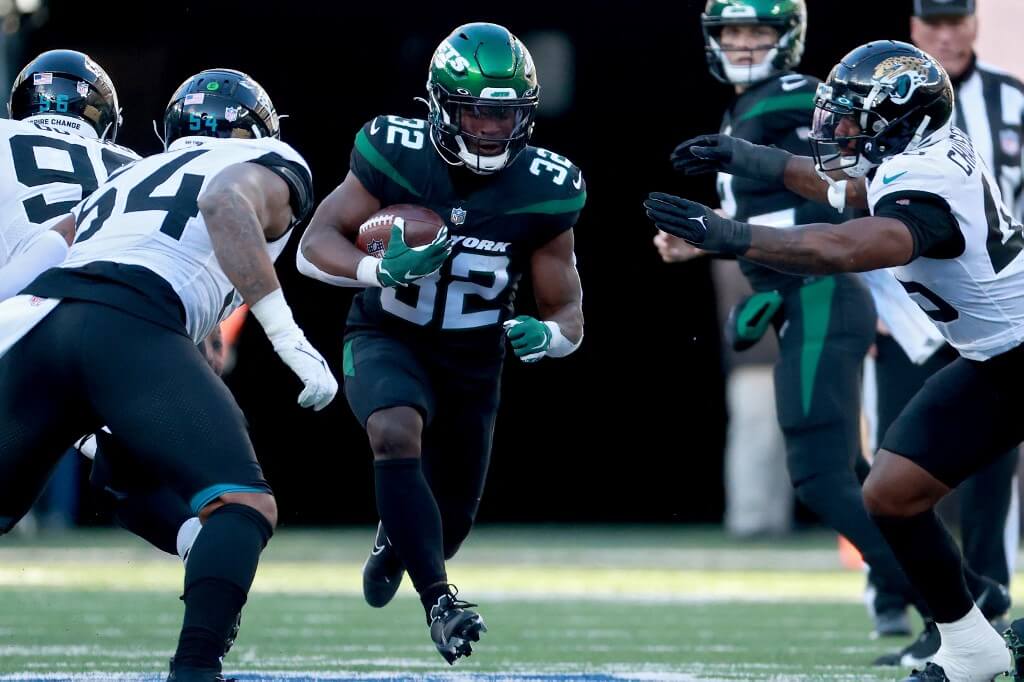 The Buccaneers are three-point home favorites on the BetUS Sportsbook, which is to be expected. Interestingly, Tampa Bay -3 is currently at even-money while taking Los Angeles to cover the spread is -120. That’s certainly a sign that the public and Vegas like the Rams a little more than their underdog status implies.

Tampa Bay is at -145 on the moneyline to win straight-up while the Rams are +125 moneyline underdogs. The over/under point total is 48 points.

If you’re betting online, consider taking the Rams straight-up as road underdogs because the value is solid considering how many injuries the Buccaneers are dealing with. Los Angeles is a good underdog up to around +120 with late line movement and any figure below that number might not be worth it.

Of course, that is a riskier bet than you might be willing to take. With regards to the spread, the Rams are in a good spot at +3 and are a solid bet up to +2 or so. However, Los Angeles being -120 on the spread makes that bet much less valuable.

The under is also a smart take for this game. Both the Rams and Buccaneers scored tons of points in their Wild Card games but did so against mediocre defenses. Now, they’ll have to go up against much better defensive units so points should be much harder to come by. The under provides pretty good value at 48.5 points and is still good to go down to around 46 points.