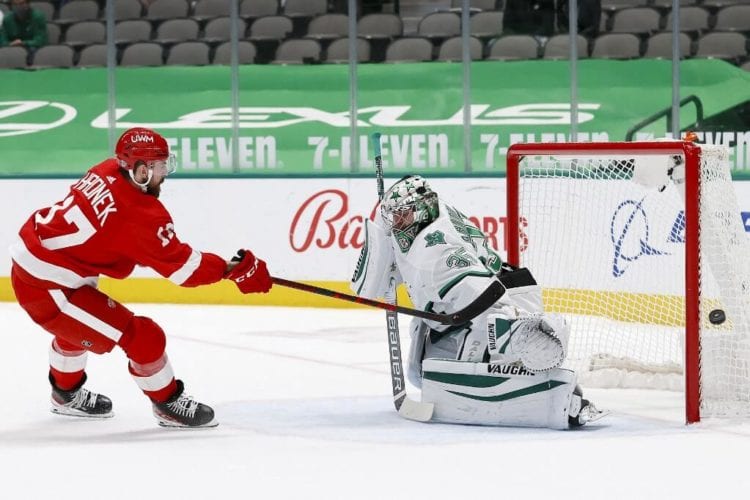 The Dallas Stars had been experiencing a hangover from last season’s Stanley Cup Finals loss to Tampa Bay. Lately, it seems that the Stars (17-14-12) are rising up from the shadows and are positioning themselves for a postseason run. Dallas has won three consecutive contests and is only three points out of fourth place in the Central.

Meanwhile, the Detroit Red Wings (16-24-7) have no realistic shot at making the postseason, but they can still play spoiler. Detroit hasn’t won enough games to be playoff relevant, but the Red Wings have kept most games extremely close. The Wings have been absolute ATS machines, producing a puckline record of 29-18.

Case in point, the first of this four-game series between Dallas and Detroit was decided in a shootout. PIcture it, American Airlines Center, April 19, 2021. The Stars overcame two heroic second-period goals by Red Wings center Luke Glendening to win on Denis Gurianov’s fifth-round shootout goal. Check out the highlights. Totally worth it. Don’t forget to take a look at our NHL news when you make your bet in our online sportsbook.

Dallas found a way to win and Detroit managed to cover the spread. This is a common theme, and one we would be wise to pay attention to. The second game of this series should play out much the same way. The Stars (-260) are pretty heavy favorites vs the Red Wings (+220) on Tuesday night, according to our most recent NHL betting odds. This is a brilliant situation to walk the tightrope, to read (and bet) between the lines.

Pavelski, Stars Set to Ride Momentum as Far as Possible

When NHL.com posed a question to Dallas center Joe Pavelski about the importance of winning amidst the team’s trials, the 15-year veteran’s answer spoke volumes. “You get some momentum going, and guys feel good,” he said. “Playing with confidence and with one or two goals feels nice. The biggest thing is we’ve got to keep taking care of our business, and that’s what we have been able to do, I think. The energy has been good.”

That energy swell comes up against a Red Wings squad which has been frustrated more often than not this season. The Stars are 4-1 against the Red Wings but only two of those wins were lopsided. Detroit has shown real moxie and has made its opponents earn the W, for the most part. Only two teams in the league (Winnipeg Jets and New York Rangers) have a better ATS record than the Red Wings.

The projected goalies for this matchup are Thomas Greiss for Detroit and Jake Oettinger for Dallas. Greiss and Oettinger basically balance each other out at present, as they are each playing excellent of late. Greiss has a .952 save percentage and Oettinger is sporting a .950 save percentage over their last two games.

Dallas’s elite defense is the ultimate difference-maker here, but the expectation is for regulation to be insufficient to decide it. Look for the Stars to eke out another one-goal victory at the expense of the Red Wings. Bet the Dallas moneyline and the Detroit puckline. Now is the time to WALK THE LINE!