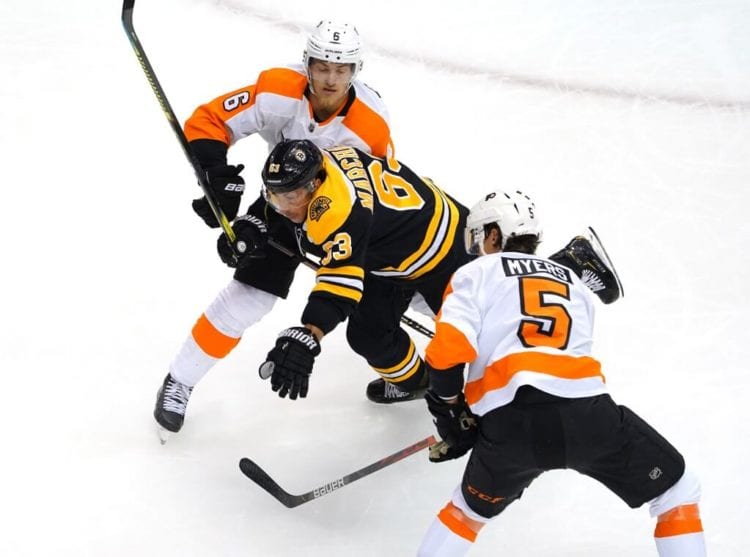 Two Eastern elites rekindle their online betting rivalry as the Philadelphia Flyers head to TD Garden to battle the Boston Bruins who are aching to put on a whooping. Boston is slightly favored in our online sportsbook despite having some issues scoring goals.

Philadelphia is having no issues there. They’ve been scoring at will, a blowout against Buffalo notwithstanding. But Boston will be a predicament for them and, as far as NHL betting matchups go, this favors the Bruins.

This Thursday feature could be a playoff preview as both Philadelphia and Boston compete for their division’s top spot. Let’s take a look.

Flyers: The Best Defense is a Great Offense?

Philadelphia is continuing where they left off last season. The Flyers, under coach Alain Vigneault, revitalized itself and made a beeline for the top spot in the playoffs thanks to a prolific offense. They finished seventh in the league in goals scored (3.29) and fourth in high danger goals percentage (54.7%).

This season, the Flyers are recording 3.7 goals per game (5th) despite only 24.2 shots. Key skaters C Sean Couturier and D Shayne Gostisbehere are absent, but the offense continues to click.

But digging deeper in the stats and you’ll find the Flyers may be skating on thin ice. The team ranks last in shots for percent at 40.7% and is 28th in even strength Corsi For percent (CF%). Their 6-1 blowout loss to the Sabres may have skewed the stats, but it could be a preview of the Flyers’ floor.

Goalies Carter Hart and Brian Elliott play well 5-on-5 with a 94 save percent (6th) but that fell to just 80.9 percent (25th) when down a man. Philly’s 73.3% PK also shows their vulnerability and they’ll need to be disciplined.

Bruins: Boston Due For a Big Break

Bruins fans are now beginning to wake up to the reality of playing their new division. The B’s have yet to record a regular period victory after splitting their back-to-back against the Devils then getting blanked by the Islanders.

It’s not for lack of trying. Boston outshot New Jersey the first time and outplayed the Islanders but ran into two stone wall goalies. The Bruins average 30.7 shots per game (league average is 30.4) but only 1.33 goals, which is last in the NHL.

This shouldn’t bug the Bruins at all. This veteran team, despite losing longtime captain D Zdeno Chara, will keep “keeping on” and get a good break at some point. They are fourth in the league in CF% at 54.9 and 11th in scoring chances percent at 52.1, both on even strength.

The goals will eventually come. Boston, still one of the NHL’s grittiest teams, will maintain its tough-minded defense and find ways to win even while playing in the NHL’s deadliest division.

Looking at the records, the casual observer might wonder why Boston is favoured per NHL odds. The Flyers have scored more, won more, and just look better. But the difference comes in the form of 5-on-5 play and goaltending, both of which favor Boston.

Philadelphia and Boston are on opposite ends of the goalscoring divide right now. The Flyers haven’t shot the puck too often but have scored more. Their 15.1 shooting percent is third in the league while Boston’s 3.3 SH% is dead-last.

Boston is still statistically the best team when it’s 5-on-5 and they have scored on the man advantage this season. Hart plays well enough to backstop Philly, but he’ll be busier than G Tuukka Rask as Boston will outplay the short-handed Flyers.

Keep a close eye on the betting lines for this one. BetUS sportsbook is offering the odds at a solid price and it’s one reason why it’s one of the best per sportsbook reviews. I like for the Bruins to get over the hump and make a statement against the Flyers.