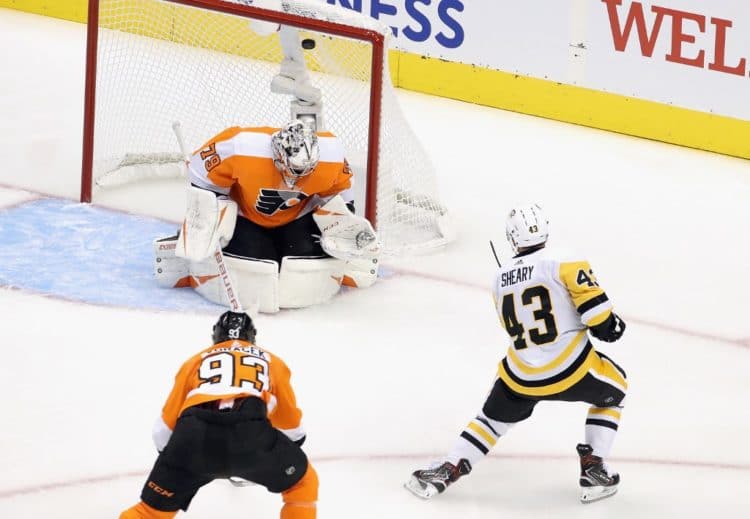 The Pittsburgh Penguins and Philadelphia Flyers look to get their respective 2021 NHL seasons off to a positive start when they meet on Wednesday night in the City of Brotherly Love. BetUS’ Sportsbook has put together a look at Flyers vs Penguins NHL betting picks.

The Flyers enter with high hopes after reaching the Eastern Conference semifinals last season. The Penguins will look to get back in the Stanley Cup mix after having their 2019-20 campaign come to an abrupt halt.

The NHL season has been shortened to 56 games with every game coming against a division rival. Now, let’s find out if Pittsburgh is the online betting pick to get it done on the road or whether Philadelphia is the better sportsbook betting pick at home.

First, let’s take a look at all of the NHL odds for opening night.

The Penguins went 40-23-6 last season to finish third in the Metropolitan Division and fifth in the Eastern Conference with 86 points. Pittsburgh finished the 2019-20 campaign ranked 10th in scoring (3.2 gpg) and 12th in goals allowed (2.8 gpg). The Penguins finished sixth in shot attempts allowed (29.7) and 10th in penalty kill (82.1), but an awful 25th in faceoffs and 24th in penalty minutes.

Star center Evgeni Malkin scored a team-high 74 points on 25 goals and 49 assists. Right-winger Bryan Rust scored a team-high 27 goals while finishing with 56 points. Superstar Sidney Crosby had a poor season by recording a modest 16 goals and 31 assists. Goalie Matt Murray went 20-16 in 38 starts with a 2.87 goals-against-average. Backup goalie Tristan Jarry went 20-13 in 33 starts with a 2.43 GAA.

The Flyers went 41-21-7 to finish second in the Metropolitan Division and fourth in the Eastern Conference with 89 points. More importantly, from Dec. 8 on, Philadelphia tied Boston for the best record in all of hockey. The Flyers went 3-0 in round-robin action to get the top seed in the conference playoffs.

After getting past what TSN calls a “feisty Montreal team” in the opening round, Philadelphia fell to a white-hot New York Islanders team in a seven-game thriller that saw three games go to overtime. While Philadelphia’s playoff run ended abruptly, the Flyers are expecting blogger and better in 2021. Philadelphia ranked an identical seventh in scoring (3.3 gpg) and goals allowed (2.8 gpg) last season. They finished first in faceoff percentage (54.6) and third in shutouts (12).

The odds to win the 2021 NHL Stanley Cup are value-packed!

Pittsburgh and Philadelphia were mostly quiet in the offseason, though the Penguins did extend goalie Tristan Jarry for three years after his breakout campaign.

For this regular-season opener, I’m going with Philadelphia to take care of business at home. These longtime division rivals have split the last 10 meetings evenly with Philly taking three of the last five meetings.

Pittsburgh has gone 2-5 in its last seven games against teams from the Eastern Conference and 2-7 ATS in its last nine road games. Philadelphia went 19-7 over its last 26 games last season and 23-9 in the last 32 games at the Wells Fargo Center.

More importantly, I believe 22-year-old Flyers net-minder Carter Hart has the talent to become the best in the game today. Hart has cat-like quickness in the net and finished last season with a fantastic 2.42 goals against average. Hart and Philadelphia’s top two lines get it done against Malkin and Crosby!

BET ON THE FLYERS VS PENGUINS NHL GAMES