The BYU Cougars look for a fifth straight win when they square off with the Pepperdine Waves in the West Coast Conference tournament semifinals on Monday night in Las Vegas. These two teams played twice in the regular season, with the home team winning each meeting.

The Cougars have won six of their last seven, with the only setback in that span being against No. 1 Gonzaga. BYU (19-5) is squarely in the NCAA Tournament field, but it would like to improve its seeding with a win in this one and in the WCC tournament title game.

Pepperdine (12-11) still has some work to do if it wants to play in the Field of 68. The Waves knocked off Santa Clara in the quarterfinal round of the WCC tournament, but they’ll need a couple more wins to continue on into the NCAA Tournament.

When you do your online betting on this game, BYU is a 8½-point favorite, with the over/under set at 148½.

Pepperdine is more than content to let Colbey Ross lead the way again in this one. The senior guard was outstanding in the quarterfinal win over Santa Clara on Saturday, finishing with 25 points and 12 assists. With that output, he made college basketball news as he moved past Loyola Marymount’s Hank Gathers to become the all-time leading scorer in the history of the WCC tournament.

Ross is one of just three players in the history of Division I men’s basketball to have at least 2,100 points, 800 assists and 400 rebounds. (Trivia answer: Oregon State’s Gary Payton and Notre Dame’s Chris Thomas are the other two.) He’s third in the nation in assists per game with 7.7 and is scoring 18.3 points per contest this season.

His teammate, and fellow All-WCC first-teamer, Kessler Edwards has been just as impressive. Edwards had 21 points and 11 rebounds in the win over Santa Clara and has scored in double figures in 14 consecutive games. He’s averaging 16.8 points and 6.8 rebounds for the season.

In the first game against BYU, the Waves shot just 28.8% from the field in falling by 11. Pepperdine shot better in the second meeting, hitting 42.4%, which helped make the difference in a three-point win.

Second-seeded BYU wants another shot at No. 1 Gonzaga in the tournament final and better seeding in NCAA March Madness, but it can’t afford to look past Pepperdine. The Cougars are an experienced bunch, with three seniors leading the way.

Guard Alex Barcello is averaging 15.7 points, 4.6 assists and 4.5 rebounds per game. He can get hot from the outside, as he did in a win over San Francisco on Feb. 25, hitting 7-of-7 from beyond the arc on his way to a career-high 29 points.

Center Matt Haarms has played in plenty of postseason games with Purdue before transferring to BYU, and he’ll bring a presence in the paint. The 7-footer was the WCC Defensive Player of the Year and is coming off a season-high-tying five blocks in a win over Saint Mary’s. He’s also averaging 11.0 points per game in his first season with the Cougars.

The third senior is Brandon Averette, who is averaging 11.4 points and has hit 39 3-pointers on the season. He and Barcello will look to stretch the Pepperdine defense to allow Haarms and freshman Caleb Lohner room to operate in the paint.

Both of these teams can put points on the board in a hurry, with multiple players able to put the ball in the basket. BYU has more strength in the middle, which could be the difference in this one.

Haarms has played big in the postseason in the past, and his ability to change an offense with his shot-blocking ability could be key in this one. If the Cougars can shut down the perimeter and funnel the ball to Haarms, they could keep the Waves’ offense in check.

Still, this one feels like it’s going to be close throughout, so when you’re doing your college basketball betting, take the nine points and the Waves to cover. 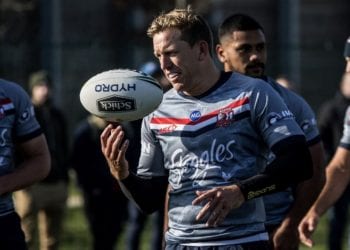