The Rockets managed to take Game 1 but that didn’t stop LeBron James and the Lakers from rebounding and building a 2-1 series lead. Furthermore, Los Angeles has outscored Houston 229-211 in the last two games. So does this mean we can expect the Lakers to win their third straight?

Let’s take a deeper look at this matchup to provide some sports betting clarity. Remember to check out our NBA betting page to stay up to date on all things NBA playoffs.

As the tweet above shows, Game 3’s triumph was an all-around team effort. LeBron James, Anthony Davis, and Rajon Rondo all made considerable contributions to Los Angeles’ win. However, it’s not all that surprising to see James and Davis put up huge numbers. After all, James is a four-time NBA MVP and Davis is a seven-time NBA All-Star. Rondo, on the other hand, hadn’t stepped onto the court in 178 days before the Lakers’ Game 2 win, where he finished with 10 points, 9 assists, and 5 steals. That was a good start but Rondo managed to take it to another level in Game 3. Keep an eye on this veteran as this series progresses.

Let’s take a head-to-head look at these teams to see where the Game 4 edge lies.

Above are the playoff stats for both the Lakers and Rockets. Quickly compare the strengths and weaknesses of both teams in order to find that perfect Game 4 wager. As can be seen, the Lakers are averaging roughly five-points more per game than Houston. Although the Rockets defense is slightly better, it seems that that edge is negligible.

Shooting-wise Los Angeles gets the edge in field-goal percentage. Nevertheless, the Rockets, per usual. are both attempting and making more 3-pointers and are draining considerably more free throws as well. Ultimately, those numbers make it seem like Houston would have the statistical advantage heading into Game 4. However, the opposite is true once we begin to consider rebounds, where Los Angeles is beating Houston both offensively and defensively. With this in mind, it’s clear that the momentum and statistical edge both belong to the Lakers.

Next, let’s check out injuries.

Both teams have some players on the injury report. However, both sides will have their key players healthy. Below we’ll be taking a deeper look at the recent betting trends as we head into Game 4.

The numbers tell the brutal truth and it seems like the Lakers have a massive advantage against the spread. In addition to the against-the-spread trends displayed above, Los Angeles is 5-2 ATS in its last seven games versus a Western Conference opponent. Considering that the Lakers are -5 favorites, the cold trends listed above don’t apply to only Game 4. Moreover, the Rockets are 1-4 ATS in their last five. With this in mind, it’s clear that the Lakers have a substantial edge.

Now that we’ve identified where the advantage lies, let’s take a look at pertinent betting lines for this Game 4 matchup.

Below sportsbook fans can find all the lines involving the Lakers-Rockets series, and each team individually as well. Specifically, we’ll be covering the NBA championship odds, NBA conference odds, and even NBA series prices. Scroll down to check out some of the basketball props you can expect for Game 4. 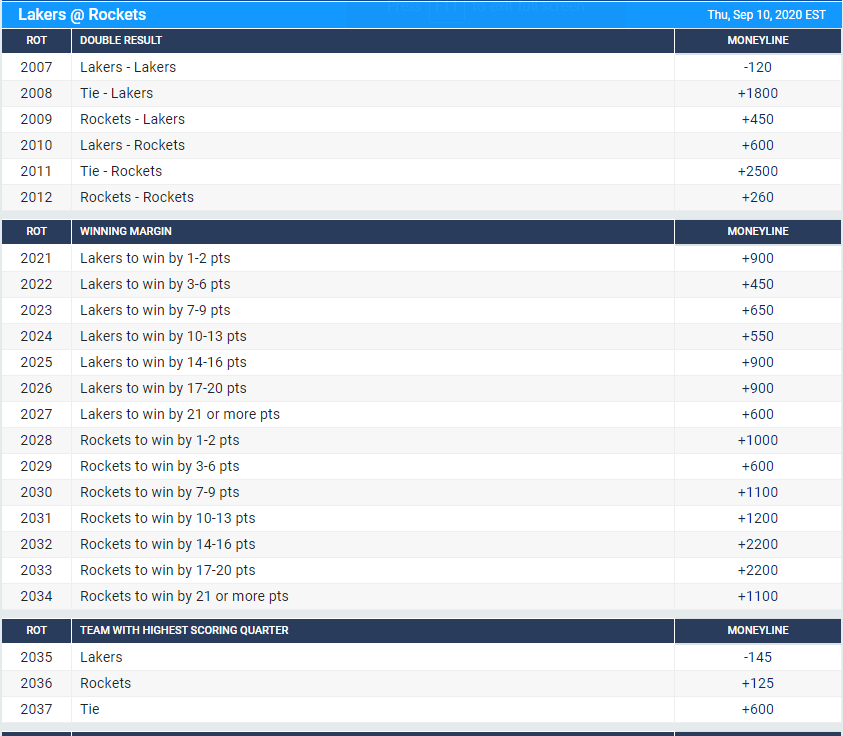 Make sure to check out BetUS’ basketball squares contest to get in on some thrilling NBA playoff betting action. You can buy as many squares as you want for different parts of the game; third quarter, first quarter, first half, and the full game. Check out the terms and conditions to get all the juicy details.

The numbers don’t lie and it’s clear that the Lakers have an offensive edge. Not only that, but the rebound dominance Los Angeles also wields should help it secure Game 4. Look for Los Angeles to cover the 5-point spread and expect the trio of James, Davis, and Rondo to deliver another eye-catching stat sheet. With the Totals set at 220.5, expect the result to be UNDER.