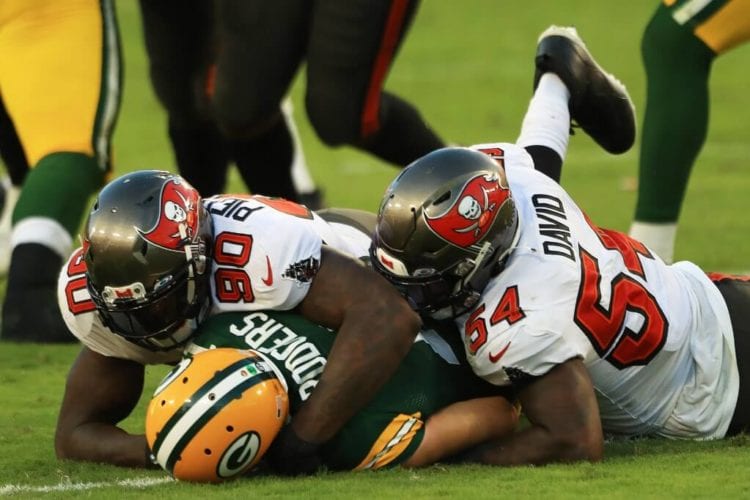 NFL sports betting nears its last call this Sunday with the NFC Championship as the Tampa Bay Buccaneers travel to Green Bay to take on the Packers. The BetUS NFL injury report details who’s hurt coming into Sunday’s game.

The sportsbook took some more money on the Green Bay Packers’ moneyline Thursday, as it moved from -170 up to -175. The point spread remained at a cheap -3½ on the Pack. The total, meanwhile, notched up a half point to 51½.

Not by accident, NT Vita Vea was seen by beat reporters working drills with the rest of the team. Vea is slated to return from injured reserve after missing nearly four months. For the 20 minutes the media watched practice, Vea looked good moving in and out of his stance and popping tackle dummies.

Coach Bruce Arians addressed the status of the 346-pound tackle. “Vita moved around pretty good today when it was full speed,” he observed.

With the addition of DE Jeremiah Ledbetter (calf) who is cleared from the injury report after missing last week, the Bucs should return the entire rotation of their front defensive line for the first time since September.

On the downside, the most notable absentee from yesterday, WR Antonio Brown (knee), also missed Thursday’s practice. He’s now considered a game-time decision, but much will be read into his participation during Friday’s final practice.

Absent too for a second day was CB Jason Pierre-Paul, but his knee injury is as much veteran rest, and he’s confirmed as being able to be ready without having practiced the entire week.

A handful of other players were limited in Thursday’s practice, as they were the day before. Among them RB Ronald Jones (quadriceps), WR Mike Evans (knee) and WR Chris Godwin (quadriceps) are all listed as questionable. Same on the defense for CB Sean Murphy-Bunting (quadriceps) and S Jordan Whitehead (knee). Expect all of them to be cleared to play for Sunday’s game.

Finally, S Antoine Winfield popped up on Thursday’s report with an ankle. He practiced in full and was assigned no injury designation, but is worth noting if he is downgraded come Friday.

After their Thursday practice in full pads, the Packers issued a report with very few changes from the day before.

The only real difference was the addition of CB Will Redmond (knee) who was limited in practice and is now listed as questionable.

Because it was Thursday, TE Marcedes Lewis (knee) could be found on the sideline for his normal veteran’s day of rest. He’s still listed questionable and should go back to being limited in the final practice on Friday.

Otherwise, Green Bay dumped a bunch of other players on the report this week, adding up to a total of nine others who were all limited on Thursday and still listed questionable. On offense, that’s RB A.J. Dillon (quadriceps), RB Jamaal Williams (ankle), WR Allen Lazard (wrist), WR Equanimeous St. Brown (knee) and RT Rick Wagner (knee). On defense, they list ILB Krys Barnes and OLB Za’Darius Smith, both for thumbs, and DE Kingsley Keke, hoping to return from a concussion. Same goes for K Mason Crosby (shoulder) — all of whom could be cleared to play after tomorrow’s workout.