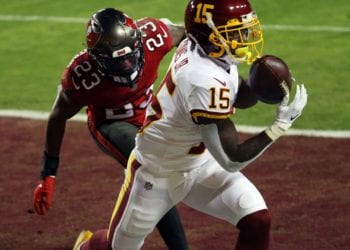 Both NY and Washington have struggling offenses and capable defenses. The Giants already beat the Football Team 20-19 in Week 6, and I’m picturing a similar score here. NY has three losses in its previous four games, but only lost those contests by a total of six measly points. Most recently, the Giants lost the Buccaneers by two points, so they can handle the WFT. Washington is 1-5 ATS over its last six as a favorite, and 1-6 ATS in its last seven games coming out of the bye week. Giants 23, Football Team 17

Daniel Jones and the New York Giants scared the Tampa Bay Buccaneers in Week 8, but still they have won only one game and that game was against the Washington Football Team (20-19). If healthy, Sterling Shepard has proved that he can be their No. 1 receiver and RB Wayne Gallman has been playing better since Devonta Freeman got injured.

The Giants average 18.1 points per game (second worst in the league) and the total has gone over in five of the Giants’ last seven games played in November.

The Washington Football Team comes from their bye week. They haven’t won since Week 1 and they average 19 points per game (third worst in the league). The total has gone under in six of Washington’s last eight games against the Giants.