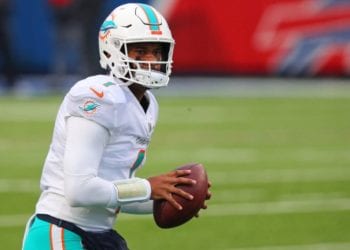 The Hawks are one of three undefeated teams left in the NFC and the NFL betting odds are expecting them to remain so this weekend against the Dolphins. Miami enters at 1-2 following their disappointing start to the season. Although the Fins managed to pick up their first win of the season in Week 3’s TNF match versus the Jags, there’s no way they’ll win this one.

Russell Wilson is having an MVP caliber season and won’t be letting up anytime soon. The Fins got exposed defensively by Buffalo and I’m expecting Seattle to have an even bigger day against Miami. Stick with the Seahawks here.

The undefeated Seahawks are flying high, despite having a pretty flimsy defense, overall. Superstar QB Russell Wilson and the Seattle offense are just that good. Wilson leads the NFL with 14 passing touchdowns and a phenomenal QB rating of 139.0.

It’s possible that the Dolphins will slow Wilson down, but they won’t stop him. Even if lock-down CB Byron Jones (groin) returns to the field for Miami, he’ll be limited. Wilson is riding a record-breaking, MVP-trophy-earning, Super Bowl Odds -winning type of wave, and he’ll keep surfing right around the Dolphins.

However, Fitzmagic is back in play for the Fins. The success Miami experienced  through the air vs Jacksonville in Week 3 will continue vs a susceptible Seattle D. The Dolphins won’t win, but they’ll threaten to. An unconventional shootout results in a Seahawks victory, the Dolphins’ comeback attempt falling short. Hawks 33, Fins 29.

Right now, it is Russell Wilson’s show in Seattle. The Seahawks average 37 points per game (second best in the league) and Wilson’s numbers are ridiculous (925 passing yards, 14 TD, 1 INT).

The total has gone over in 4 of Seattle’s last 5 games.

The Miami Dolphins keep trusting veteran QB Ryan Fitzpatrick, but his numbers are not that good (679 passing yards, 4 TD, 3 INT).

Miami averages 23.3 points per game and the total has gone over in 7 of their last 10 games. Go over in a blowout for the Seahawks.

BET NOW ON THE SEATTLE SEAHAWKS VS MIAMI DOLPHINS MATCH