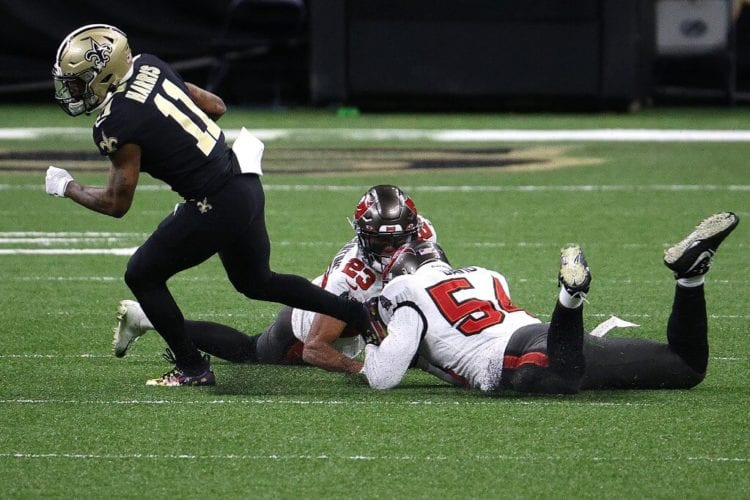 The 2020 season opened with the same high expectations as the previous season. Having been upset out of the playoffs the previous year in the Wild-Card round, the Saints’ odds to win the Super Bowl were a low +1000, and their expected wins were set at 10½.

Playing through 11 broken ribs and a career-load of other injuries, veteran quarterback Drew Brees somehow only missed a month from injuries that had some speculate his career could be over. Still, they overcame this and other speedbumps — such as the game without any running backs due to COVID close-contact exposures — to eventually make it to the divisional round of the playoffs.

Installed as the favorite in all four of their opening games, New Orleans lost two of them outright (to the Raiders and Packers). So despite their win over the Buccaneers in the season opener, they still trailed them in the standings after the first quarter.

Highlighting the high-scoring nature of the 2020 season, the Saints also played their first games all flying to the over.

Heading into their Week 5 match against the Los Angeles Chargers, the Saints seemed in disarray, as stand-out wide receiver Michael Thomas, out since he sustained an injury in the season opener, was suspended for throwing a punch at a teammate. The Saints did win that game by the grace of a Chargers’ last-second field-goal attempt that smacked the crossbar, giving New Orleans the opportunity to win in overtime.

Still, they failed to cover the spread, as would be the case for several weeks, until their rematch against the Tampa Bay Buccaneers, in which they blew them out of the stadium, 38-3. While disappointing against the point spread, they held their division in check with a half-game lead and tiebreaker over the Bucs.

The campaign’s second half started ominously, as Brees’ body had enough. Having sat out the second half of their Week 10 slugfest against the San Francisco 49ers, it was later revealed that Brees had numerous broken ribs and a collapsed lung. That brought on a Taysom Hill and a fortunate string of opponents for the Saints.

Hill carried a three-game win streak, with two of those against the Falcons, and another against the Broncos under their COVID-emergency seventh-string quarterback Kendall Hinton. Under Hill, New Orleans continued their nine-game winning streak, including cashing the point spread in all four games.

They also switched hard to unders. After only once not cashing the over in the first half of the season, the Saints posted four straight unders on the total.

With a playoff berth just within reach, New Orleans couldn’t quite grasp the brass ring. After being upset by the Eagles, Drew Brees returned to much fanfare for their matchup against the Kansas City Chiefs.

Brees and the Saints narrowly lost to the Chiefs, but managed to bounce back strongly, hanging over 50 points on the Vikings in a record-setting effort by Alvin Kamara who rushed for six touchdowns on Christmas day.

But by New Year’s, disaster struck for their final week as their entire active running backs’ room was exposed to Kamara who tested positive. They went to their finale against the Panthers using wide receiver Ty Montgomery as the game’s lead halfback. Though they already clinched the division, beating the Vikings, their win against Carolina was not enough to clinch the conference, and the Saints entered the postseason with the number two seed.

The paper tiger of 2020, the Chicago Bears, found their way to the playoffs and faced the Saints in the opening round as double-digit underdogs. New Orleans established its dominance and covered the number for most bettors — the final play, a Mitchell Turbisky touchdown that brought the game within 12 points, but no extra point was tried as time had expired.

Posted as short favorites against Tampa Bay, New Orleans held as close as could be expected for a team who lost the turnover battle by four. The Saints’ only long downfield pass came from Jameis Winston, underscoring what may have been Drew Brees’ final game.

A new quarterback and $30-million in cap space would be a good start.

No other team faces salary-cap hell quite like the Saints, and it’s not even close. Even with Drew Brees restructuring his contract to help with his post-retirement cap hit, the Saints are in peril especially with that overall number shrinking next year.

The Saints also need help on the defense, which improved as the season progressed but could still hope to pick up some pass-rushing help in the offseason. This will be especially true if they lose Sheldon Rankins, Marcus Williams or Trey Hendrickson to free agency. The Saints will pick near the end of the draft, in the 28th position.

New Orleans doesn’t have much to hang their hat on returning in 2021. Some solid skill-position players and a decent offensive line is better than nothing. All of their strengths will depend on how well they do filling in the player under center in the upcoming season.