The Indianapolis Colts spent much of 2019 trying to find their identity on offense. The result was a mediocre 7-9 record and a third-place finish in the AFC South.  Indianapolis spent the offseason trying to make sure their quarterback play was more consistent in 2020.

In free agency, they signed quarterback Phillip Rivers to boost the offense. He is motivated to prove his doubters wrong after a disappointing 2019 campaign. He’ll get a chance to do so while competing in a transitioning AFC South, a division that has the Jacksonville Jaguars in rebuild-mode and saw the Houston Texans trade away their best player.

If you are new to online sports betting, check out our Super Bowl Odds page.

As noted earlier, the Colts will be playing in a transitioning division. This, along with the fact that the Colts have the 16th toughest regular season schedule in the NFL in 2020, could be enough to get them back to the playoffs after missing the dance last season. The combined 2019 record of Indianapolis’ opponents is 128-127-1. Their schedule is pretty back-loaded, with the potentially tougher games coming at the end of their season. 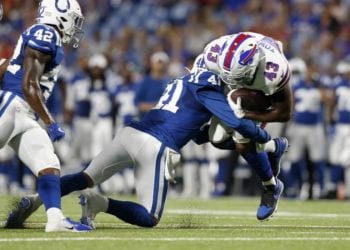 The Colts will play perhaps their toughest division rival in Tennessee twice in a span of 17 days.  Their first non-division test will come in week 2 when they travel to Minneapolis to take on the Minnesota Vikings.  The week 9 contest against Lamar Jackson and the Baltimore Ravens will be no walk in the park.

All in all, the Colts could be in a position come December to make a run at the playoffs.  Watch out for Jonathan Taylor, who comes from a smash-mouth program at Wisconsin, and should have no problem fitting in with the Colts’ solid running attack.

As aforementioned, the Colts are coming off a mediocre 7-9 season that pegged them as the 3rd best team in the AFC South. This was a substantial step down from the 10-6 record the franchise turned in the previous year. The unexpected departure of Andrew Luck, who announced retirement in late-August, thrust then-backup quarterback Jacoby Brissett into the spotlight.

Although the Colts started off strong, posting a 5-2 record through their first seven games, they would soon lose steam. Injuries to Brissett, WR T.Y. Hilton, RB Marlon Mack and TE Eric Ebron would pave the way to Indy’s 7-9 finish.

Rivers is a former eight-time Pro Bowler and is well known for his ability to sling the deep ball. Despite finishing 2018 with 32 touchdowns, 12 interceptions and a 105.5 passer rating, Rivers was be as sharp in 2019. In fact, the former Charger is coming off a 23 touchdown, 20 interception season, with an 88.5 passer rating. This was enough for Los Angeles to allow Rivers to enter free agency. The Colts signed him to a one-year, $25 million deal. Needless to say, they´re expecting a lot out of their pricey offseason acquisition.

Jack Doyle was one of four Colts who earned Pro Bowl honors last season, marking the second time the tight end has done so. Last season Doyle contributed 43 receptions, 448 receiving yards, and four touchdowns to the Colts ‘offense. Doyle actually entered the league as an undrafted free agent and has worked his way up to become a Pro Bowl-caliber player.

Darius Leonard and Jack Doyle were the only Colts to earn AP All-Pro Honors last season. This marked Leonard’s second time earning the All-Pro title. He earned the honor by being a defensive powerhouse for Indianapolis, and would go on to finish with 121 tackles (71 solo), five sacks, five interceptions and even had a defensive touchdown. Defensively, the Colts did some things right last season but there’s a tremendous amount of improvement needed in 2020. No doubt NFL sportsbook fans can look for Leonard to be leading that charge.

The Colts didn’t have a pick in the 1st round of this year’s draft. Instead, their first selection was the 34th pick overall. With it, they chose to select Michael Pittman Jr., WR, out of USC. Running back Jonathan Taylor from Wisconsin was picked up in the second as well, before Julian Blackmon, safety out of Utah, was chosen in the 3rd.

Philip Rivers was signed as a free agent in March. Clearly the Colts are interested in giving him some weapons, judging by their picks in the draft. As aforementioned, the Colts didn’t have a pick in the first round of the 2020 draft. This is because they elected to trade that pick in exchange for DT DeForest Buckner. Buckner played for the 49ers last season and tallied 62 tackles, 7 ½ sacks, two forced fumbles, and nine tackles for losses.

The Colts were in contention for the AFC South title for a little while in 2019, but they ended up third in the final standings with their 7-9 mark. Houston won the division with a 10-6 record, though it was Tennessee, which finished in second at 9-7, that made a run to the AFC Championship Game.

With the addition of the veteran Rivers at quarterback, Indianapolis is now considered the favorite in what should be another very tight race. The Colts have odds of +120 to take the division title, with Tennessee just behind at +165. Defending champ Houston has +300 odds while Jacksonville is a distant fourth with +1600 odds.

Indianapolis and Tennessee both have an over/under total set at 8.5 wins, so prognosticators do not think either team will be a dominant force in the AFC. Houston is sitting at 7.5 wins, while Jacksonville’s over/under is just 5.0 wins.

They averaged less than two passing touchdowns per game in 2019, but the addition of Rivers should help that going forward.  Defensively, the Colts allowed 23.31 points per game, which was 18th in the league.  Indy was stout against the run, allowing just 97.94 rushing yards per game.  Their secondary averaged nearly an interception per game.

The Colts’ defense put up some good numbers but were dreadful in other areas. They were good against the run, ranking 5th overall in the league with an average of 97.9 rushing yards allotted per game. However, they were 18th in scoring and 23rd against the pass. Not only that, but they also ranked 15th in time on the field. Granted, the Colts’ offense can share the blame on that one.

Moving forward, we can expect Indy to make improvements on defense. They picked up some players, which should greatly complement the talent they already have.

What is the Indianapolis Colts' all-time record?

Who owns the Indianapolis Colts?

How many Super Bowls have the Indianapolis Colts won?

Who is the quarterback for the Indianapolis Colts?

Philip Rivers is the quarterback for the Colts.